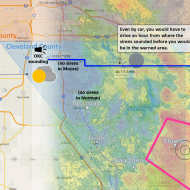 Tonight KOCO ran a story about a perceived very real false alarm by Oklahoma City’s emergency management this morning. Just after 6:15am, the city activated their Whelen outdoor warning siren network, yet for a weak storm that had itself already moved through the area hours earlier.

This comes following an earlier mistake sounding alarms in alternate wail tone overnight a few weeks ago, prompting hundreds of calls to police. But today’s example was no mistake: as News 5 reports, Oklahoma City maintains that their “best practice” (ahem) is to scream tornado under the partly cloudy skies of damp spring morning.

Oklahoma City, don’t cry wolf. I live in Moore and awoke to hearing the alerts in the distance. It was easy to hear, because it had stopped raining an hour prior and there was yet to be traffic noise.

At first I believed it was Norman.  Judging by radar and the actual warning they had no need to sound (and indeed Norman exercised proper discretion by electing not to cry wolf).  Still, even if they had, at least they are inside Cleveland county.  But why on earth would OKC blow theirs? The storm had passed over an hour earlier. Every single person that heard those sirens was under broken cloudy dawn skies opening up to a vivid and bright morning dawn. The grass was wet, the gutters still dripping, but there was no sign of thunderstorms, let alone a dangerous one.

I don’t understand why OKC would basically blow air raid sirens at 6am for a weak gust up of a storm located that far away. That’s inappropriate and irresponsible at best, crying wolf, and practically inciting panic.

Even if the storm was dangerous (it was not, but that is entirely tangent to my point), they were 40 miles away and only getting further away every minute. Even by the best possible route, the storms were an hour’s drive away.  This was not a case of giving ample “heads up” for the citizens in OK County, because no part of the county was under any threat, current or impending.

A decent emergency manager should warn citizens when they are either in current or going to face upcoming danger, but neither of those were true in this situation.  This EM just wanted to push the button and get everyone’s days started with a bullhorn.

I’m thankful that Moore is a city that respects the skies, and only issues warnings when they are truly warranted.