How to Hide an Update in Windows 10

HomeHow to Hide an Update in Windows 10 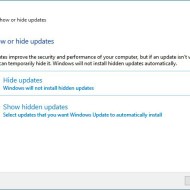 One of the design tenants of Windows 10 is the enabling of automatic system updates that are more transparent to the end user than in the past. But if you’re affected by a buggy device driver that gets installed automatically, you may want to block it. Here’s how.

There’s been something of an uproar about the automatic updates in Windows 10. These aren’t just power users that wish to specifically approve every update (although there are those that will want to). Indeed there are swaths of users of all technical skill levels being plagued with video and other “latest” drivers that don’t perform as well as other versions, sometimes causing significant problems. The worst part is the bad driver gets installed again if you remove it.

Since Windows Vista, the Windows Control Panel has provided a way to prevent unwanted updates. In Windows 10, this interface has been removed in favor of the new modern settings app, with administrative controls mostly relegated to IT system management services. The ability to hide an update is still there, even though the UI for it is gone. In lieu of that, you can hide an update in the registry, or there is now a tool you can use to stop an update from being applied. The effects of this are identical to what would have happened in Windows 7 if you had right-clicked and used “hide update”.

You can get the tool here: Official Tool to Hide or Block Windows and Driver Updates in Windows 10

When you run the program, it works largely as you would expect. Just select the update that is causing programs (or you otherwise just don’t want) and the tool will block it for you.

Many users will appreciate being kept up-to-date, but if you’re impacted by buggy drivers or just want to prevent updates you don’t need, this tool is for you. To be even safer, I recommend turning on System Restore on. This gives you additional recovery options if some future update does cause an issue. Unless you have very limited hard drive space, there’s no reason to leave this safety net unpacked.