Remove Recycle Bin from the Desktop

HomeRemove Recycle Bin from the Desktop

I do not suffer from obsessive compulsive disorder, but I do display some OCD tendencies.  One of these is habitually emptying the Recycle Bin on my desktop — I just cannot stand to see those virtual papers in there (if only I took out the trash at home with as much fervor).

Normally it’s not a problem, but there are times when it costs me. For example, last Friday I compiled some information, saved it to my desktop*, and subsequently forgot to email it to my boss. That afternoon I deleted the file, and before going home I emptied the bin, only to have my boss call wondering where the data was.  Oops.

The Recycle Bin is there to be used, and emptying it every hour undermines its usefulness. Therefore, I’ve removed it from my desktop to avoid the compulsive housekeeping from getting me in more hot water.  After removing it, the bin is still accessible from the Desktop folder from the File Explorer, but it’s less readily noticeable when it has papers in it.

To remove it, simply go to Desktop Personalization, and use the Change Desktop Icons link on the left. 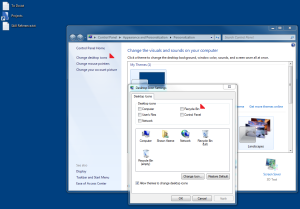 Some have suggested I simply change the “has trash in it” icon to the empty recycle bin image. But that doesn’t work for me, I still know it has files in it.

*I avoid using the Office “send in email” option, because the file name ends up as Document1.xlsx and not a proper title.  Presentation counts, kids.