Sorry Verizon, there’s no easy way to say this. For a communications company, you really suck at enabling your customers to communicate with their world.  In a day where real-time collaboration is a necessity, consumers expect a certain level of functionality. This includes the ability to communicate in text conversations with a group of colleagues.Dozens of networks and protocols have been built over the past several decades to provide this service, including instant message platforms like Yahoo, Windows Live, and AOL Messenger, and more recent comers such as Skype, Google Talk, Lync, Facebook Messenger, and more. While most of these services are free or ad-supported, the oft requirement of all participants using the same platform means that for many, the lowest common denominator is text messaging over SMS/MMS.  This is truer today than ever, as more and more consumers are communicating primarily over mobile devices than from a cubicle desktop.

On a Windows Phone device like the HTC 8x, no other real-time group chat application exists. Even apps that use data, such as Facebook Messenger or Skype, cannot notify you when a new message is received in a group conversation. One must continuously open the app and ‘refresh’ to see if any new messages have arrived. Push notifications from text messaging is not only more power efficient, but also more ubiquitous.

For users on the AT&T, Verizon, or Sprint networks, this is not an issue. Both Apple and Microsoft have included group-messaging SMS/MMS in their devices. For customers of the Verizon, this functionality does not exist. For reasons that are not clear and have never been stated, Verizon has removed the ability to engage in a group conversation from all devices on their network except the iPhone.  Why? 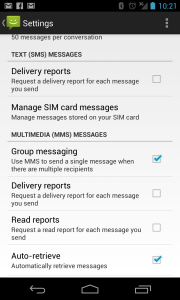 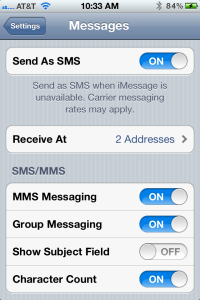 You won’t find this group messaging switch on Verizon models of Windows phones.

I’ve attempted to contact Verizon several times for an explanation, but all their service agents know is that the feature is not present.  I’ll be engaging the BBB to request that Verizon elaborate on their decision to restrict communications of users of these phones, and will update this article with the response.

May 17, 2013 Update:  Verizon has responded to my FCC complaint and advised that they will be releasing a software update mid year to bring group communications to Windows Phones.

In the meantime, does anyone have a suggestion for a real-time text application that allows for both group chat and push notifications when new messages arrive?